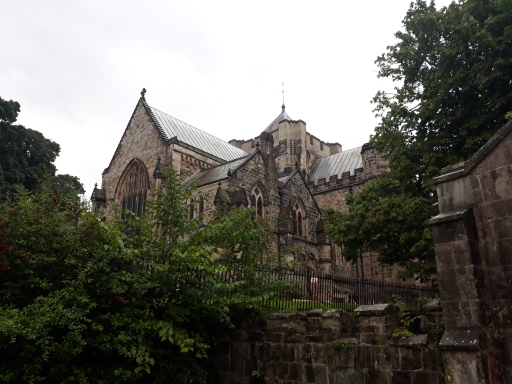 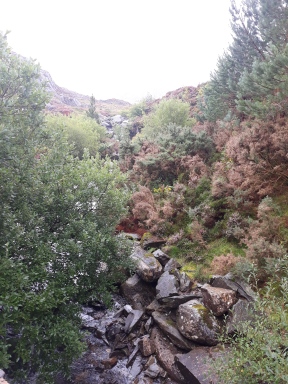 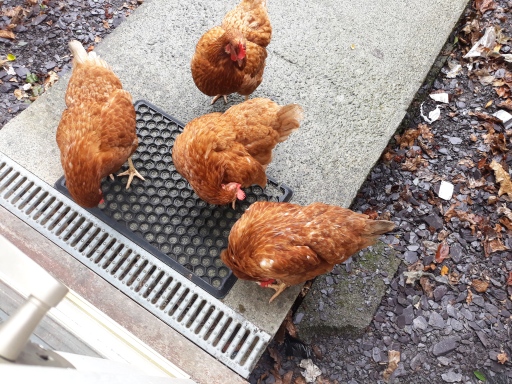 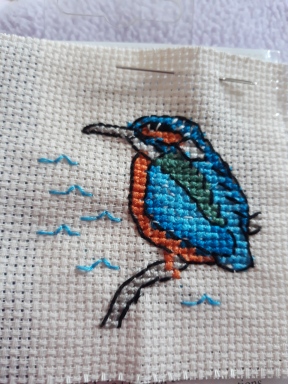 Leisurely start, and then migrating in the rain into Bangor to find the cathedral. I was so early (as I had allowed enough time to  have trouble finding the car park/cathedral), I had a café nero. Then into the cathedral, for a well held sung communion. In the absence of the choir, I particularly liked the setting with a cantor holding us (and us mostly singing after her). All the more impressive after much apologising at the beginning as the sound system wasn’t working. The acoustics were good, and the only thing I really struggled to hear was the preach (I had sat near the front). Talking again about Jesus being the words of eternal life, and how eternal life is now – which I am thinking about. There was a great story culminating in the line from the 23rd psalm ‘surely goodness and mercy will follow me all the days of my life’ – in the genre of “the piece of cod that surpasses all understanding”  and no doubt I shall find a circumstance to use that in the future!

I was very struck by a piece of art in the cathedral called still doubting – by John Granville Gregory. It was clearly labelled  “no photos” so I didn’t, and as I am not sure about the copyright I have not copied the image from other places on the internet where it is clearly available. It was Caravaggio-like – but modern day. I particularly liked that Thomas had glasses, and was intently looking at the scar on Jesus side. The scar was definitely healed and though Jesus was in traditional dress the juxtaposition of the disciples clearly of today, spoke of the time discontinuity (and how Jesus is for yesterday, today and forever).  I will probably go back to the cathedral on Friday, to purchase an image of it from their shop!

I drove for abit in the pouring rain to find a café for some lunch (very tasty spicy sweet potato soup), and soon headed home for a crafty afternoon. The kingfisher embroidery is finished – and I am on to owls in bobble hats!

As I said previously, after an early start (8:55) I drove and did park in Llandudno, and eventually got the bus back to Old Colwyn to pick up the route again. The bus service was reduced due to the bank holiday, and a ‘ghost’ bus passed the stop on the app after 20 minutes but a real one didn’t come for another 20 minutes. This did give me enough time to buy a bottle of water, as I had not picked one up for my bumbag before I had left base camp. It was only when I was finally on the bus that I realised I hadn’t picked up my walking poles (I was going to regret that later). I also regretted that I managed to get off the bus without the water I had bought – so I hope someone on that number 12B got to enjoy it!

Anyway eventually I connected with the touching point from Saturday and started walking at 10:50!! It was fresh and dry, and bank holiday and all really quite busy. I was grateful for the toilets that materialised after about a ½ mile. Colwyn Bay sea front was much improved from my last visit (a holiday with Moyra in July 2002 – Colwyn Bay was particularly memorable for me needing to be educated by Moyra as to why there were UV lights in the toilets in those days). However the walk book also made much of the pier – which has clearly had a calamity since it was published. I had a coffee and ice cream in a crazy golf café after about 3 miles at the far edge of Landrillo-yn-Rhos (and bought another bottle of water), and I stopped to pray in the little chapel, of St Trillo en route.

All was going well, round to Penrhyn bay, where I definitely spotted seals, with the little Orme rising on the horizon. The walk book was very excited about this steep ascent and descent and the coast path being a path not a joint cyclepath/coastpath. I was not! Particularly as my walking poles were in the car. It did turn out to be steep and confusing and on the way up I added the indignity of losing my way. After various attempts to re-find the path, I resorted to sheep paths and the OS map app, and I eventually moved my red triangle to where the coast path really was. I really wished I had my poles!! When I finally was sure I was back on the right path I stopped and had a snack, before tackling the descent. I don’t particularly like climbing without my poles, but I really don’t like tricky descent without them!!! I had just got back to the road again and was giving thanks – when a particularly strong gust of wind caught my Brecon beacons stripey sun hat (my second loss of the day!)

I was glad when I soon reached Llandudno and eventually reconnected with the car. I used a lamppost with a no drones sign as the touching point. I did a bit of a recky of the next bit of the walk, by driving the toll road round the great orme to suss out the path ahead! I stopped at the rest and be thankful café and had some very restorative cheese on toast. After my difficulties with the little orme I didn’t want a repeat performance tomorrow. (The jury is out on whether I will do the great orme tomorrow – I will need to study the weather forecast. I may do the next stage instead and come back to it – if the wind drops later in the week the great orme would be much more pleasant!)