So after a lot of driving on Wednesday, I drove only a few miles on Thursday. Initially I went to Marybank picnic area, so I could enjoy walking in the castle grounds of Lews castle. This turned out to be very scenic, initially alongside the river Creed, until reaching the coast. It was tamer and ideal territory for red squirrels but none were seen sadly. As I saw no other squirrels, I am convinced there must be reds as they are much shyer than their grey counterparts (especially the South Nutfield ones!). I encountered and used my first woowoo (which is a waterless toilet). The signs kept saying that the woodland café was 2km away (I had in fact covered over 5km when I finally found it), complete with a King and Queen Lewis chessmen – which had seen better days! 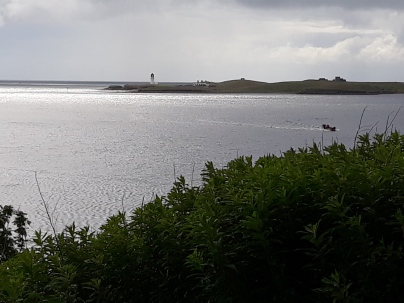 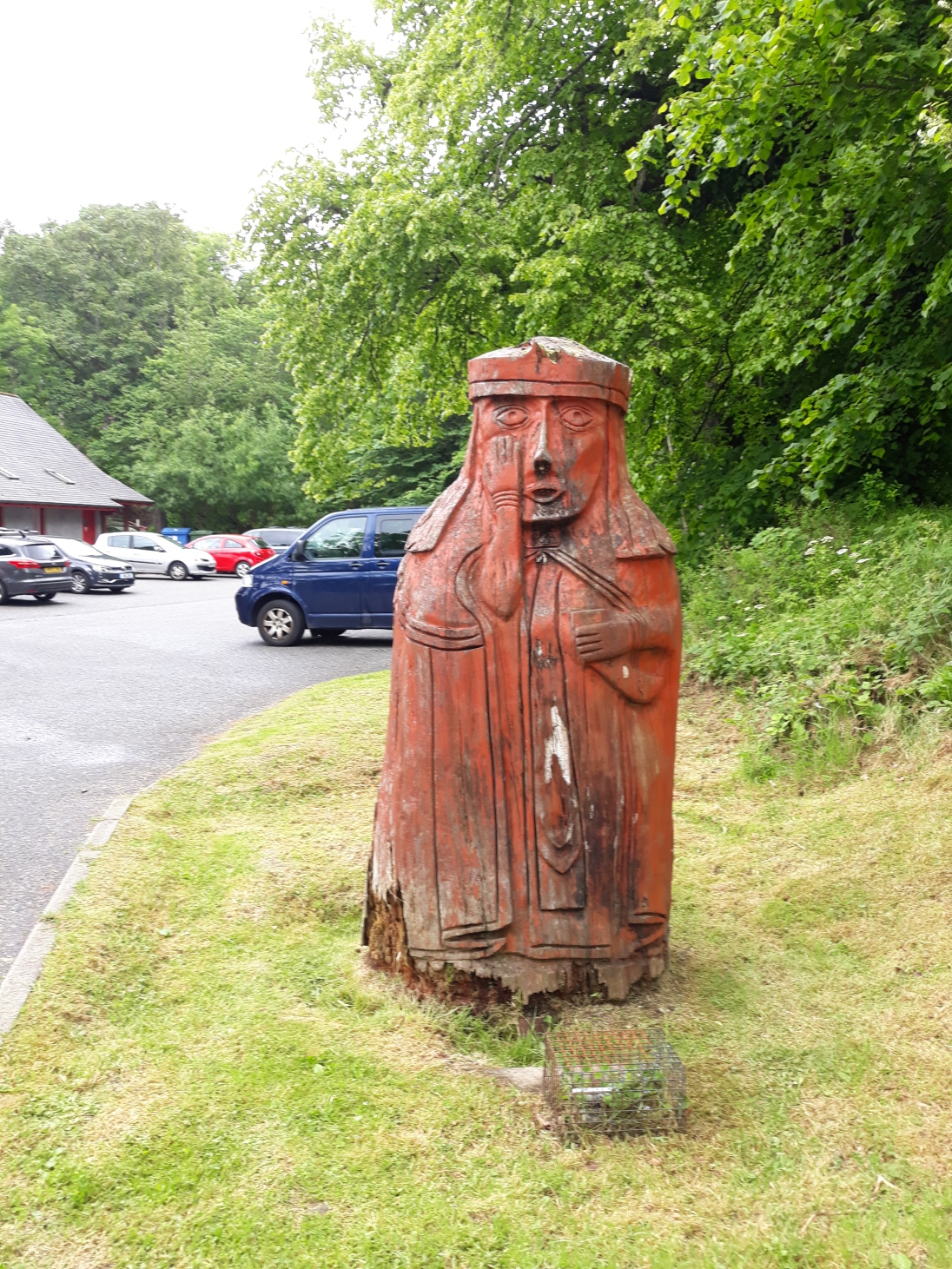 After a necessary coffee stop, I used the ordnance survey app on my phone to help me get back to the Marybank picnic area. Throughout the weather was very changeable, with frequent short showers, which as the day progressed became rather longer spells of rain. After a trip to the co-op in Stornoway and as the weather was deteriorating I returned to base and enjoyed some embroidery accompanied by tennis on the telly! Good to see Andy Murray in action (with significant glimmers of his old self), but do worry about him falling over now as well as everything else!

Various wildlife of the day contenders. I know I am not supposed to like them but the ‘wild’ rhodis are spectacular here currently. I also like these young fir cones, and yet another orchid. Red squirrels were elusive as previously mentioned but I did finish my embroidery one too! 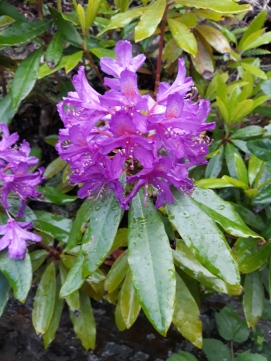 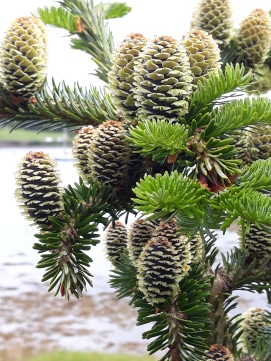 Friday dawned brighter with a drier forecast (in fact when I was out and about it only rained on me once and for all of 5 minutes). However I was still fully clad in my waterproofs as the wind remains cool to put it mildly! I drove up to Eoropaidh and followed a walk from the ‘Western Isles walks book’. There was a frustrating encounter just before I set off with a locked toilet (and I don’t mean because someone was in it).

This turned out to be a glorious and achievable walk taking in the ‘butt’ of Lewis complete with Lighthouse. Initially I met a very interesting cyclist (who had cycled up from Bradford), which was impressive to say the least. Then occasional walkers, a number of whom had chosen to do the walk in the opposite direction to me. This was a much wiser choice than the one I had made as it meant not so much walking straight into the biting cold wind. I had a coffee stop part way round, but this had to be carefully chosen so I was out of the wind too! 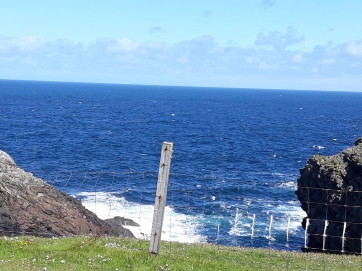 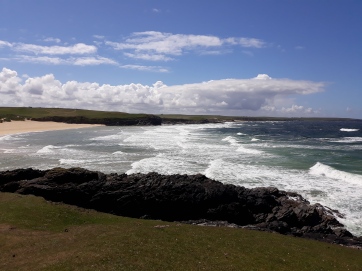 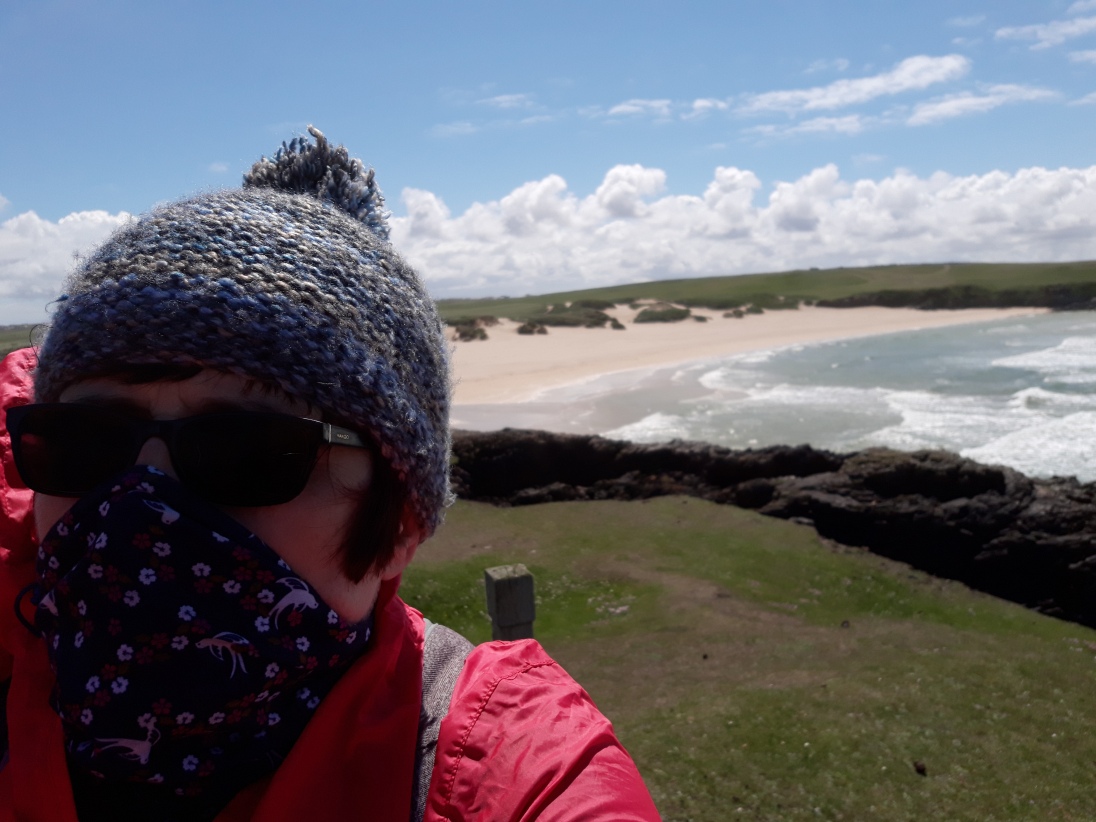 I drove into Port Ness to eat my lunch and find a toilet that was open! I was rewarded with a beautiful view over the harbour to the bay. I ate my lunch watching some diving sea birds, because of the spectacular plunging they were indulging in, I think they were gannets, but I was too far away to be certain! I spotted the ‘wobbly dog’ café, and in honour of all my canine buddies felt obliged to have a coffee there (which was very good!). The proprietor like my earlier cyclist turned out to be from Yorkshire (Sheffield this time!). 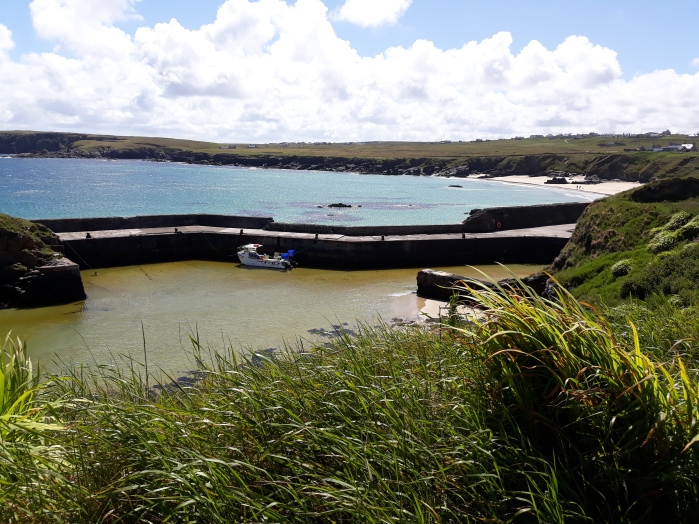 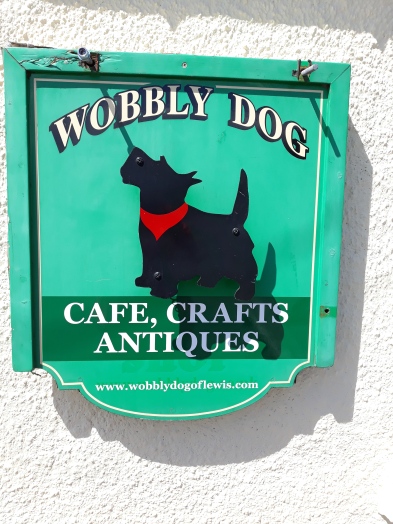 In terms of wildlife of the day – I saw an interesting bird whilst on the headland, not sure what it was, have consulted the bird book with no success – large brown with a white diagonal stripe on the wings, definitely a ‘raptor’ but know no more than that. It is a bit small in the picture I’m afraid! There were also some fantastic flowers, again I don’t know what they are. 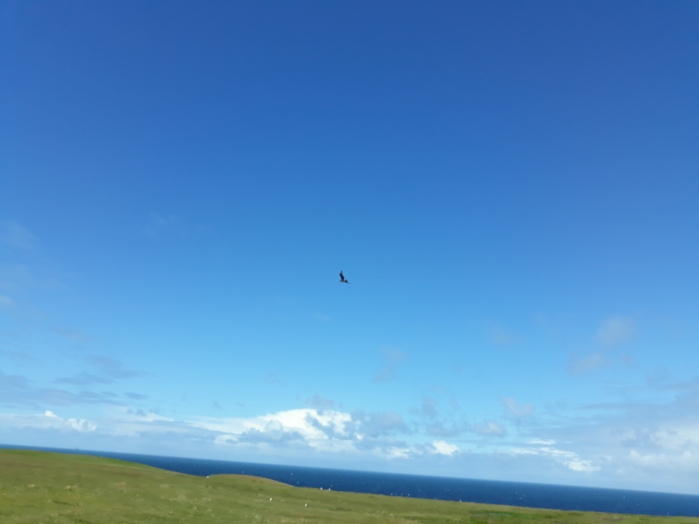 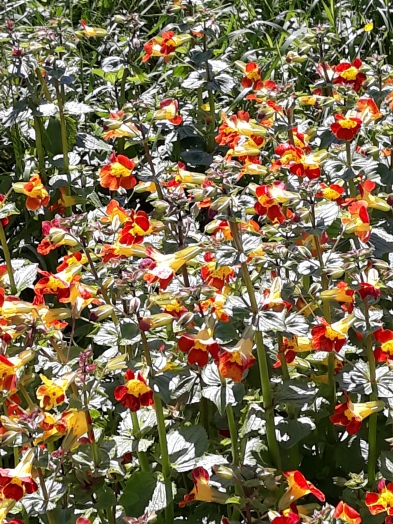 Will be going out again later to collect one of my university buddies from the airport. She also came with me on the 1995 trip, so I am sure there will be some reminiscing!