Tuesday dawned cloudy and cooler, so I decided to visit the blackhouse museum at Garenin and explore the coastal walking route options from there. By the time I got there the sun was out and the cloud had dispersed – (it did return later). I decided to start with the walk and the path was rocky and rapidly ascending, this time following green and yellow guidance markers. I got to the summit of Aird Mheadhonach, and looked beyond unable to find the next waymarker pole. The views were stunning but I wasn’t happy to stray from the route so decided to turned back. Green posts in the prevailing scenery seemed counter intuitive to put it mildly – and they were in a poor state of repair.   I had a coffee at the summit cairn and just drank in the fantastic view too. 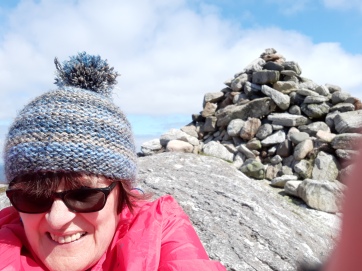 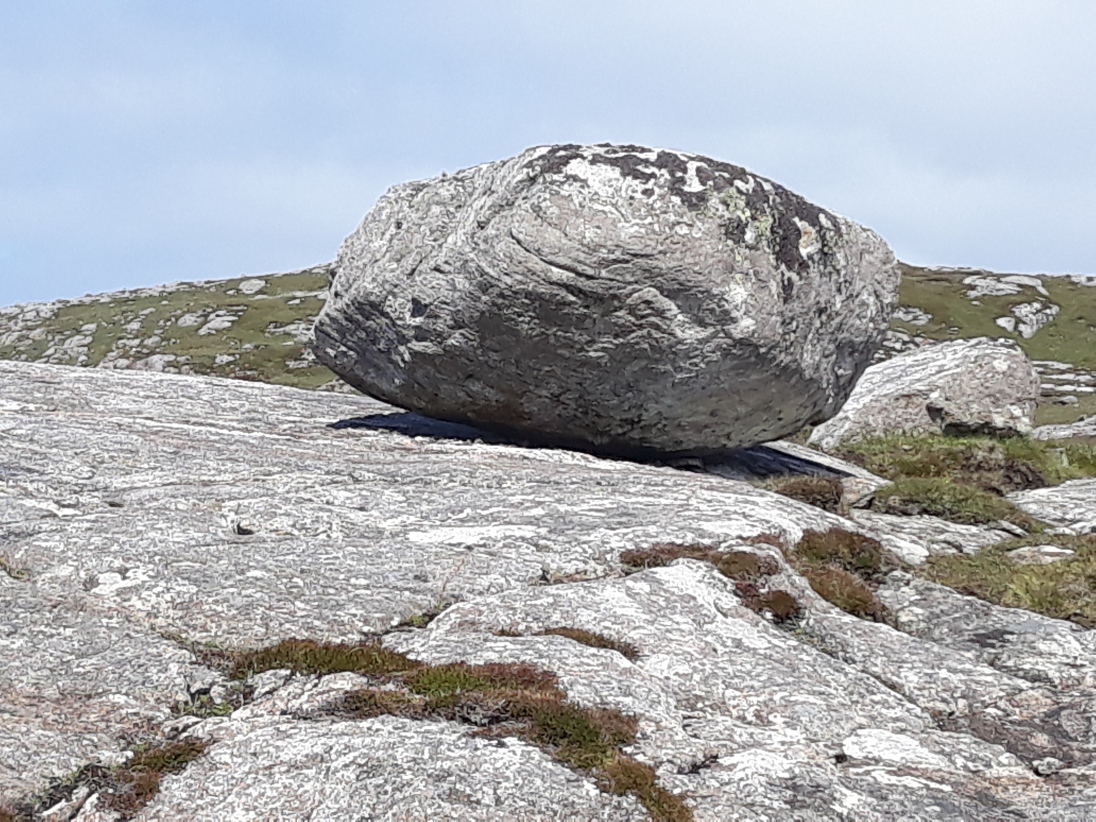 After my descent, I also had a coffee in the cafe and a look around the black house museum and the beach on my return. It is hard to imagine how tough it  must have been to live in this way in close knit communities, and that they had only been vacated finally in the 1970s. It was good to see the enterprising use of a couple of the blackhouses to provide accommodation (both a hostel and a holiday let!) too. I was also very taken with a deep pink harris tweed handbag in the inevitable gift shop, which set me thinking, but it wasn’t the sort of style I would really use.

I went a bit further down the coast, to try the coast path again, this time in an area where otters were very likely. I tried the coast path again (this time the posts were faded red and yellow). It started off ok, and after an easy grassy path to start and a difficult style, I made it to the top of the  low cliff to find yet again the next posts were invisible. Frustrating!!! I walked back and went round the sandy bay to the other side, keeping a weather eye out for the elusive otters. I had a comfort break and a coffee out of the cool wind on the far side of the beach on otter watch. Only to find a camper van had pulled in behind me and were watching my every move! Not ideal…. 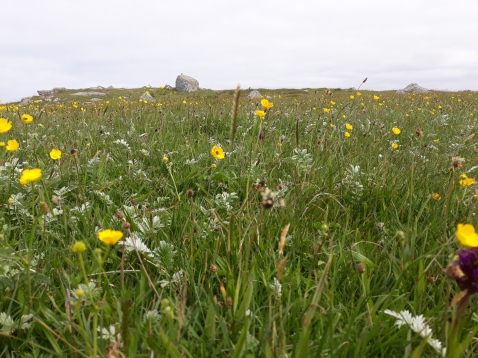 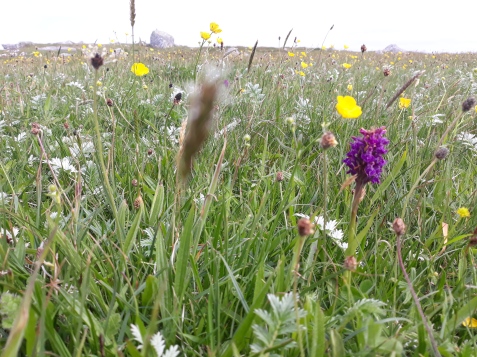 Wednesday was overcast virtually all day, cool again and with a cold wind. I had found  a couple of places to walk on the road down to Harris, one just in Lewis and the other in Harris. I started at the Aline Community forest, it was nice to walk amongst the trees, but the trails had clearly seen better days, and I had to guess which way to go. The toilets were also a no go zone! Finally got down to the Lochside (Loch seaforth) and had a coffee – seeing an impressive Heron. 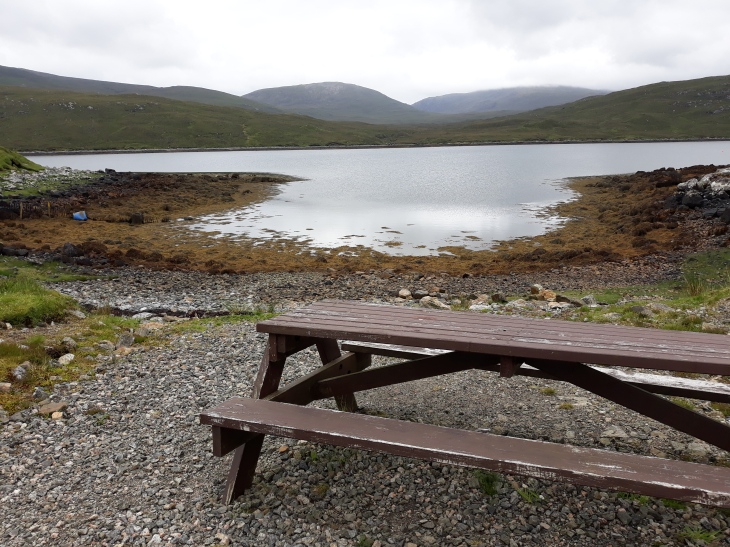 I moved on to the other end of the track at Bagh Bhiogadall that leads eventually to the Eagle observatory I was at previously. This was a typical Scottish walk – the outward leg walking up from the loch into the cool wind and the return back down to the loch with the wind at your back. It was a rough and rocky track – at least there was no potential for getting lost!  It was overcast and at times a fine drizzle. I met 2 other groups of people on the trail, one of whom suggested I try the visitor’s centre at Loch Eireasort. (It was eagle territory but not eagle weather).

It was too cool to do anything other than eat lunch in the car, and I went on to the suggested visitor’s centre. I saw an eagle virtually immediately and when I was leaving. After a warming coffee stop in the café, I spent about ½ an hour on the otter viewing terrace (before the cold got the better of me). No otters seen sadly yet again! The information in the café suggested that there are about 10 breeding pairs of eagles on that particular peninsula, and as the eagle flies that is actually not very far from where I am staying. So it is not implausible that the large raptor I saw on the first day I was here was one of them! 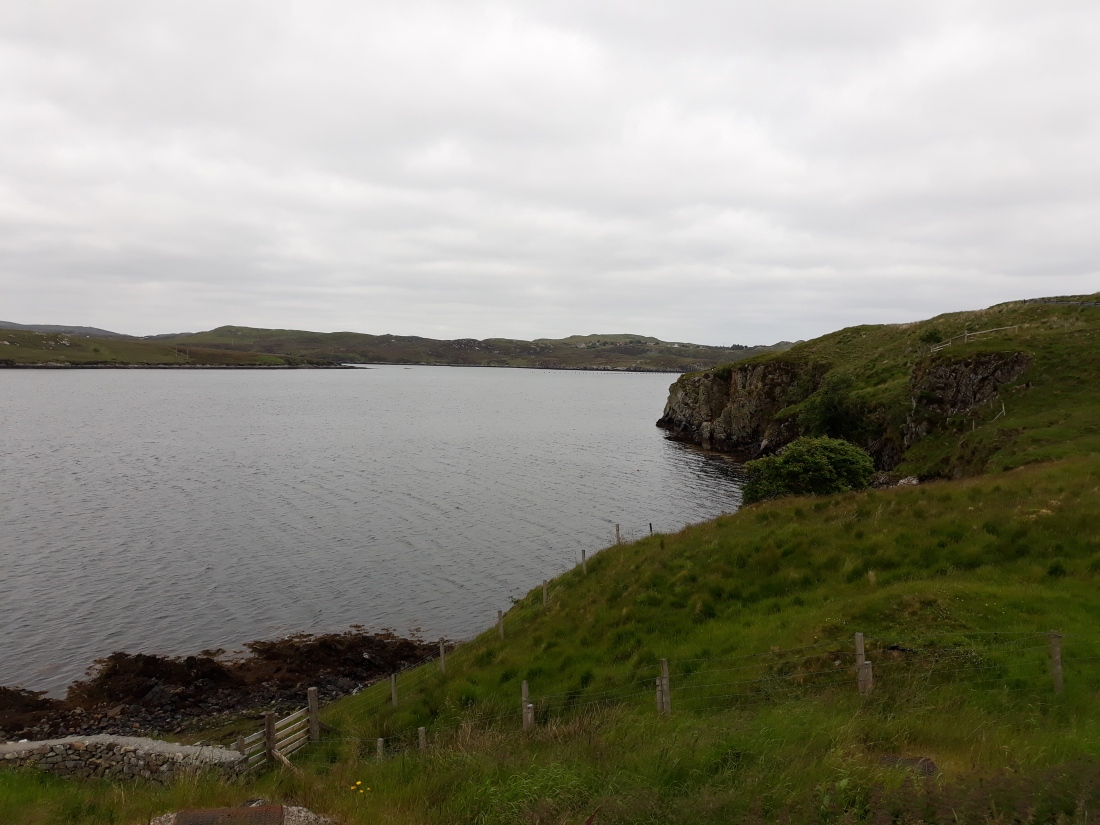 On a quest to follow up on the harris tweed bag possibilities, I went into Stornoway, and soon found one of a more suitable design, and more purple than girly pink!. As the weather forecast for Friday is better, I also booked a boat trip to the Sliant Isles to see puffins and other sea creatures. Let’s hope it stays calm as I am not a great sailor. Note: when I say the weather is better be clear, not the Saharan heat here but a comparatively balmy 18 degrees centigrade!! (It was 13 today with a chilly north eastly wind!)

Wildlife of the day – heard a cuckoo a number of times on my second walk, and eagle sightings at Eireasort Visitor centre, plus an impressive mushroom. Sorry my eagle picture is very unconvincing!!

One thought on “More walks, views, eagles and a harris tweed bag, but no otters”