Had a leisurely start to the day and walked along to the church in Harlech (St Tanwg’s) (a 10 minute stroll from base camp, and with views of the beach and Harlech castle to enjoy on the way). The service was at 9:30 – it was not clear what it was going to be but it turned out to be bilingual communion, and reminded me quite  a lot of worship at Theological College (which was in Llandaff in Cardiff where we often had bilingual worship). It was from the 2004 book, and I enjoyed immensely that where it was possible Tad Tony signed. It was particularly interesting during the hymns, and I shall be using the sign for alleluia at some point soon! The sermon was very helpful too (and I took the time to say that to Tad Tony afterwards!), and was all about being open and allowing space in the noise and busyness of life… It was about taking time and letting God in…

I had a very leisurely day after that, and I have been finding these Sunday days of rest, particularly refreshing. I read a bit, I did some embroidery, some route planning and watched some telly!

Awake early so took the chance to take an early drive to Porthmadog and was walking by 9:10. I touched the touching point I established at the start of Saturday and set off. It started well with a section next to the steam railway line (to Blaenau Festiniog) and was rewarded with a very close encounter with a passing steam train. Then there was a nature reserve and suggestions of otters, so I was on otter watch after that (no sightings of course!). Then it all got a bit unusual. 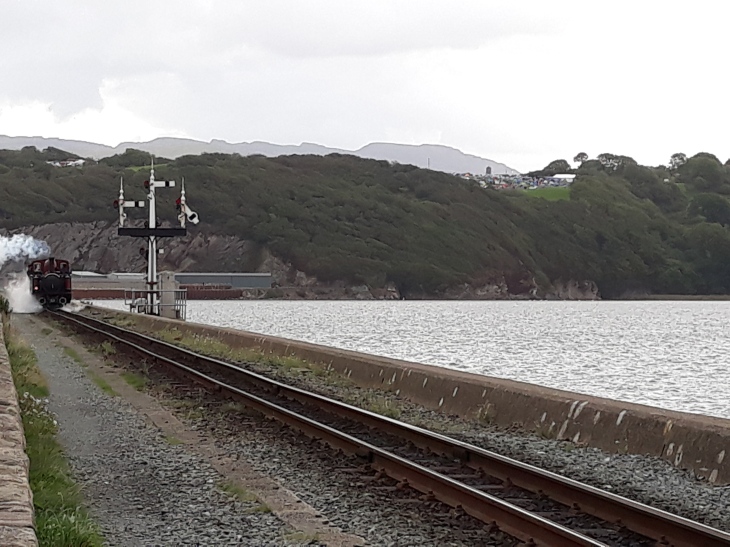 I set off on the route round the portmerion estate. It started well, but then I started encountering temporary fencing and the way was guided past a whole load of tents being packed up after the end of the No 6 Festival

Then rows of toilets and showers, and then I started encountering security guards! At one point the path was illuminated – which was very smart! But this was no doubt to help campers back to their tents at night rather than to light the path of coastal path walkers. Shortly after this, when I was very near the heart of it (and the smell of bacon sandwiches was overwhelming) – the signs for the coastal path disappeared. About 20 minutes passed as I wandered about, mystifying security guards and eventually found a lady in the welfare area, who helpfully guided me back to the drive of portmerion, so I could rejoin the path! Taking me through a restricted area to do it. All of this wasted some time, but increased my experience of festivals! There were areas where regimented rows of similar tents were being vacated (no doubt you hired your tent with your ticket) and another area with yurts. I was pleased to see there wasn’t much rubbish around and good recycling bins were available too! All the people leaving caused a bit of traffic issue, and as the next section was along the main road that was not totally great…

After about a mile and a half (and after encounters of the giraffe kind) I had turned off to cross the new bridge at Pont Briwet – I had a quick coffee to admire this feat of engineering and it was very good news (as the coast path walk book had a 9 mile loop to a higher crossing that I could avoid). It was then out, up and around a rocky outcrop and a long section on a dyke above great otter/water fowl country. Saw lots of birds – no otters. There were lots of excellent views across to Portmerion and ahead to Harlech and its castle too! 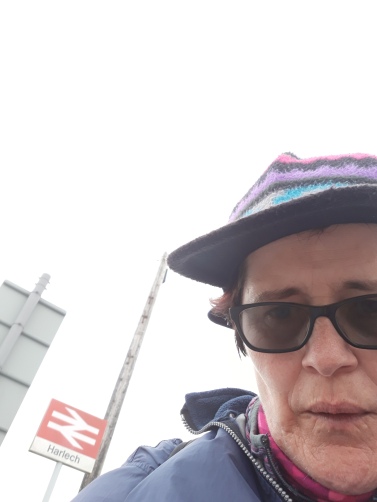 Eventually came to a section running up and over a couple of small hills, and then running between 2 hills and the coast.  I should have stopped and had lunch at this point, but I carried on and then there were farm tracks, and fields with cows, and an amenity site. It was not so scenic and I ended up having lunch sat on an odd red post, labelled BH24. I encountered on a track like the Canadian road near East Surrey Hospital. At least it was out of the wind. The final section was across fields, and then along the main road. I bought a hot chocolate from the garage as I came into Harlech, and then had a 45 minute wait for the train back to Porthmadog (I had set up a touching point before entering the station). Fortunately there was a section of platform that was covered as this is when is started to rain. I had an interesting discussion with a couple who had been to visit the castle.

Aspects of this day (certainly my encounters with the No 6 festival) were a bit unusual to put it mildly. I have never mystified security guards before by wanting to walk the coast path.